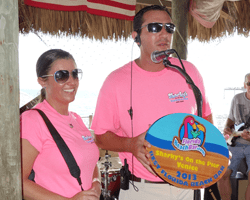 The competition was intense! THANKS to our loyal year-round customers and seasonal visitors, we actually beat out all of those better-known big names from St. Pete Beach, Panama City Beach, and Key West!

You can read all more about it here:
http://www.floridabeachbar.com/bars/SharkysVenice.asp

On Sunday, June 28th, Sharky's on the Pier was awarded the 2013 Best Florida Beach Bar Award. John Sancin, co-owner of FloridaBeachBar.com, presented the award to Justin Pachota, co-owner of Sharky's on the Pier. The huge party kicked off at 5:00 PM and continued until 8:00 PM. Party goers paid $5 to enter the event which gave them access to over a half dozen booths staffed by outside vendors who offered free samples of rum and vodka, In the true Sharky's spirit, proceeds from the admission were donated to Mote Marine. A three story Margaritaville Tequila Gold bottle marked the entrance point to the party. The first stop was a party tent that featured a large, professionally sculpted sandcastle sporting a Sharky's logo and the words "Florida's #1 Beach Bar". There were drink stations for Margaritaville Rum and Siesta Key Rum. A large buffet offered “build your own tacos” for party goer's looking for a light dinner. The tacos were exceptional. The staff was dressed in bright pink Sharky's t-shirts with a newly designed "#1 Beach Bar" graphic on the back. The pink was inspired by Pinkie, FloridaBeachBar.com’s pink flamingo.

At the other end of the restaurant, another drink station featured sample drinks from Mount Gay Rum and Pyccknn Catahoapt Russian Standard Vodka. That's a name that is hard to remember. This station also featured a new Sharky's creation called adult snow cones. They are made just like a regular snow cone, just substitute the syrup with liquor. On Sharky's upper deck, drink stations offered Captain Morgan and Parrot Bay. And if you preferred, you could have some Naked Turtle White Rum. Their slogan is "Don't Worry Drink Naked". Hmmm! Maybe we should have taken a bottle of this home. Out on the beach, college volleyball teams took turns on the court while others played cornhole. There was a beer grab bag. Pay two bucks, reach in a barrel and grab a beer. ABC Channel 7 news and SNN Channel 6 news from Sarasota both came and broadcasted the event on their evening news. High Tide provided the live entertainment. These guys have played at Sharky’s for years and are as much a part of the atmosphere as the regular patrons. Their music was great, and High Tide was a perfect choice for the occasion. This award presentation party had something for everybody and everyone thoroughly enjoyed the event. You could tell by the smiles. Nicely done!!! Congratulations to Sharky’s and thanks for the great time. Special thanks to Justin, Grace, Todd, and Matt.

Get more information about Florida Best Beach Bars at
http://www.floridabeachbar.com/bestbeachbars/2013presentsharkys.asp 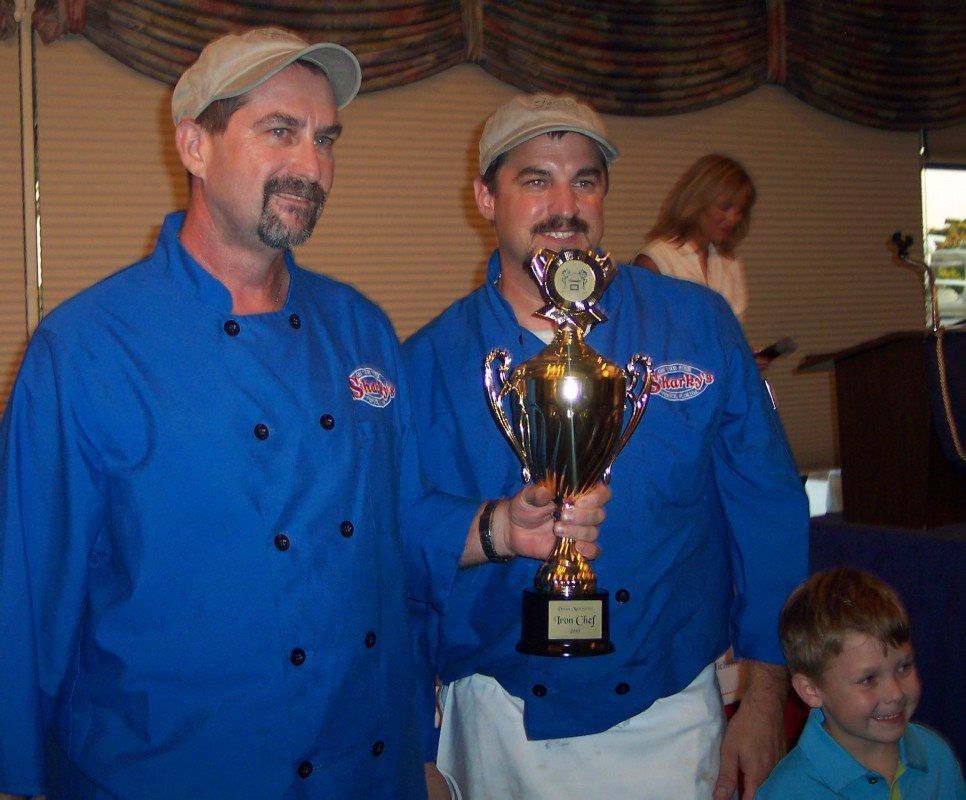 Sharky's Chef Marc Alton and Chef Eric Eastes have won the Venice Iron Chef Competition in 2010 and 2012, and hosted as the reigning Iron Chef in 2011.